An Indian medical volunteer administers a dose of Polio immunization to a child in Hyderabad, India, on Jan. 29, 2017. (AP)

A popular conspiracy theory on Facebook digs into Bill Gates’ past to try to discredit his current efforts to speed up the development of a coronavirus vaccine.

But it’s not. The post, which has been shared more than 16,000 times, was flagged as part of Facebook’s efforts to combat false news and misinformation on its News Feed. (Read more about our partnership with Facebook.) 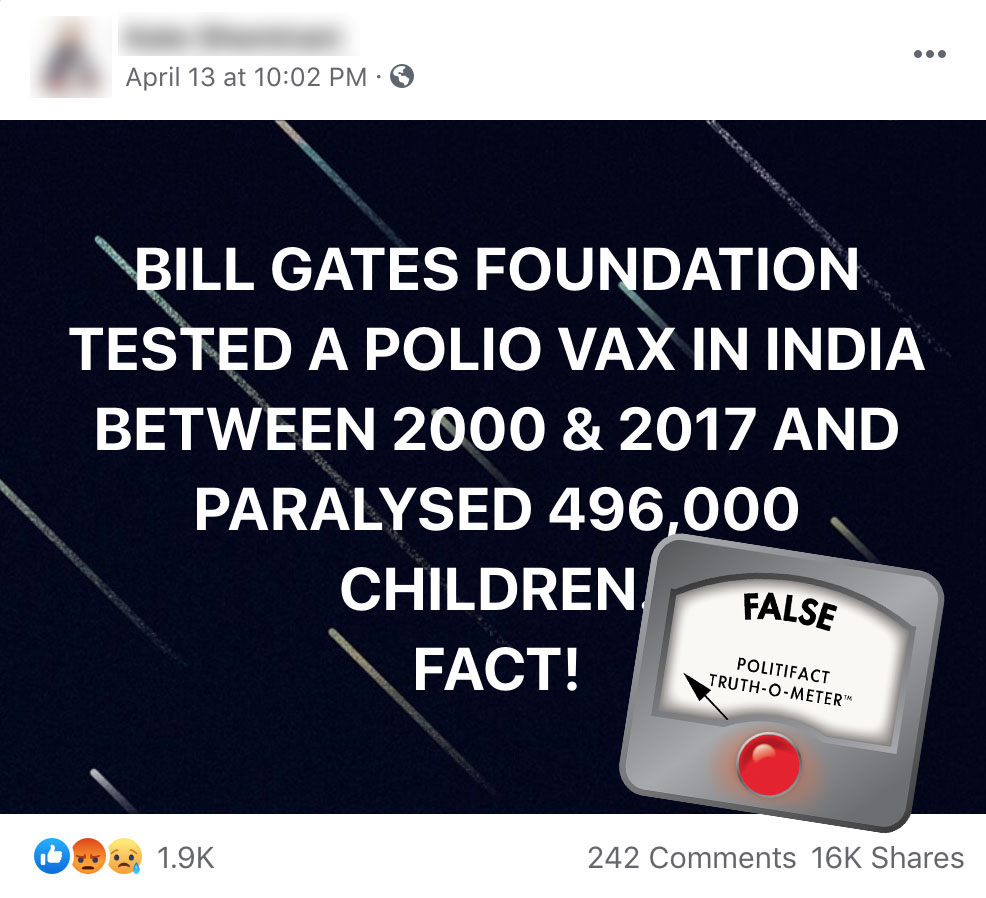 PolitiFact reached out to the original poster, but we haven’t heard back. The Gates Foundation told us in an email that the post is false.

Still, we wanted to take a closer look.

The source of the claim appears to be an April 7 Instagram post from Robert F. Kennedy Jr., the nephew of former President John F. Kennedy and one of the biggest sources of anti-vaccine advertisements on Facebook. The post was subsequently covered by the BL, a pro-Trump website that has been known to publish misinformation.

We found no credible news reports about  496,000 paralyzed children in India due to a polio vaccine.

The Gates Foundation has long funded groups in India and elsewhere that seek to expand access to polio immunization. In March 2014, the World Health Organization declared that its Southeast Asia region was polio-free, in part because of the kinds of mass vaccination campaigns supported by the Gates Foundation. However, the virus remains a threat in South Asian countries like Afghanistan and Pakistan.

According to the WHO, it is possible to contract polio from vaccines — but it’s extremely rare. The agency estimates that 1 in 2.7 million oral doses results in vaccine-associated paralytic polio.

Since the eradication of polio in India, there have been some scares of tainted vaccines. But data from the WHO show that, between 2000 and 2017, there were 17 cases of vaccine-derived poliovirus.

The Facebook post comes amid a rash of other conspiracy theories about Gates and his connection to the coronavirus pandemic. We’ve fact-checked several false or misleading claims about the billionaire philanthropist, spanning from his purported financial interest in a COVID-19 vaccine to a bogus conspiracy about tracking Americans in lockdown.